Harry Potter, one of the most prolific movie characters of the last 20 years, and more widely known by his trademark round glasses!

Behind every film character is a team who provide all of the supporting props and wardrobe to bring a character alive.

Will has been designing and manufacturing glasses for movies since the mid 1990’s having been introduced to the industry by associate Simon Murray, and has since worked on a number of major blockbusters including James Bond, and many others for which he is subject to a non-disclosure agreement which prevents him from discussing them all openly.

Recently however he has worked with David Walliams on the forthcoming Ratburger film, and Ricky Tomlinson on The Last Dragon Slayer, and The Crown, a recent Netflix production.

But his most notable work has been with the Harry Potter series of films. Will was delighted to be approached to design glasses not only for the main character, but also a number of the supporting cast too.

Will says: “I met with the director, costume designer and props master who all had a slightly different idea of what was required. The only thing that was set in stone was that the eye shape was to be round.

The first prototype we made up was a fairly chunky matt black 49mm round eye acetate (this frame was used in a later film for Ernie Prang, the Knight Bus driver).

We made up six different styles of plastic frames in varying thickness, colour and size before we decided to look at metal frames.

Again we looked at different sizes, bridges thickness of eye wire and finishes. We settled on a 38mm round silver plated frame with a “W” bridge but on the screen test  the silver didn’t look quite right so we fitted black xylo rims. These were deemed a little too thick so we settle on black enamel rims. We used components supplied to us by Savile Row, who are well known for the John Lennon round style hand made glasses.

The gloss silver of the bridge and sides was a little too bright, we tried gunmetal, this was a little too dark so we made a polyurethane wash that we tinted with a little matt grey paint  and this gave a pleasing distressed, antique effect.

Daniel Radcliffe, although associated with wearing glasses, has 20/20vision. We worked with the camera department to get the right look and reflection on the lenses. Different lenses are used for different scenes. Most of the frames are fitted with two base plano CR39 lenses with a photographic straw coloured, low bloom anti reflective coat. Some shots are done with a higher base lens with no anti reflective coat and some have no coat on at all. The stunt double had polycarbonate impact resistant lenses.

In all, we made up thirteen proto types before everyone was happy. During rehearsals we had a panic; the nickel silver from the rims was causing the actor to have an allergic reaction. We had to quickly make up duplicate pairs from rolled gold. As the films went on, and Daniel grew, we had to increase the size of the glasses.”

“We had fun with other characters from the film. We made up glasses for: witches, goblins and wizards.

The glasses I am most proud of are for Rita Skeeter the reporter of “The Daily Prophet”. For each outfit she wears  she has a slightly different style and colour of glasses.” 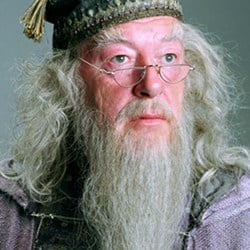 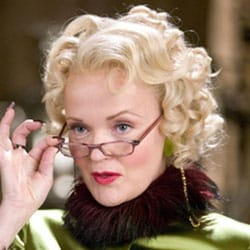 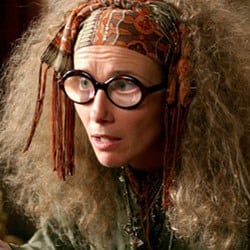 If you’re a film or theatre company looking for props for your next production, contact us for further information about movie & theatre glasses.